You know how it works on most farms or ranches: one of the adults becomes the main operator while their spouse may play an exceedingly important role, even though that work sometimes goes unnoticed. At Brad Z Ranch, Jim and Mary Bradford have long operated this way. The ranch was Jim’s dream, career and passion, but it has been Mary’s life too. And she has loved living this country life.

We got a reminder of the blessings of life when Mary was discovered in mid-November to have a brain tumor. Within a week, she underwent brain surgery. Luckily, the brain tumor was benign as the doctors had guessed, and the consequences of the surgery itself and a surgery-triggered stroke were moderate to minor considering what might have been. However, by Thanksgiving, shortly after being released post-surgery, Mary was diagnosed with severe pneumonia. It took another month and half before she could be released from the hospital. We don’t know if she was ever so happy to be home after a long two months of almost constant hospitalization. In the few weeks since she has been back, she has regained her strength rapidly and is slowly getting back her old life. We want to thank all of you in our area and in the cattle community who have thought or prayed for Mary in this battle. 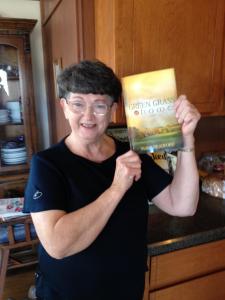 Mary Bradford with her just-released book, Green Grass of Home.

To the right is a photo of Mary right before surgery. She had in the preceding months finished writing a book that she had begun long ago. It is called “Green Grass of Home.” In it, she tells the story of her ancestors’ journey from Ireland. As Jim likes to say: Mary, like her ancestors, had a long and difficult road, but has found her way home.